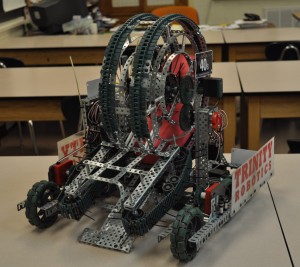 The VEX Robotics program is specifically tailored to bring the magic of robotics competition into the classroom. Robotics is an engaging way to integrate all facets of STEM education into the classroom and head-to-head competition is a natural way to capture students’ attention. During the excitement that comes with building and competing, students will be having fun in a hands on environment working with STEM concepts and life skills!

We use VEX in the Trinity class room to teach students the basics of robotics, computer design, and programming. VRC robots are 18” X 18” X 18” so they are a great way to get the kids building.

Trinity Robotics hosts a tournament every year at Trinity High School called the THS Granite State VRC Competition, where we invite local teams throughout New England to play the latest VRC game. The competition is usually one of the first in the new season. We encourage teams to build early, hopefully over the summer, and to participate. Additional NH tournaments are held in the fall at Kennett HS, Pinkerton Academy, and at Pembroke Academy. In January, the Seacoast Classic has become a great opportunity for New England teams to compete and rekindle friendly rivalries. The VRC season is often more fun and cooperative, than it is competitive. The VRC season is clearly one of the most challenging and exhilarating, and yet highly gratifying, competitions in New England.